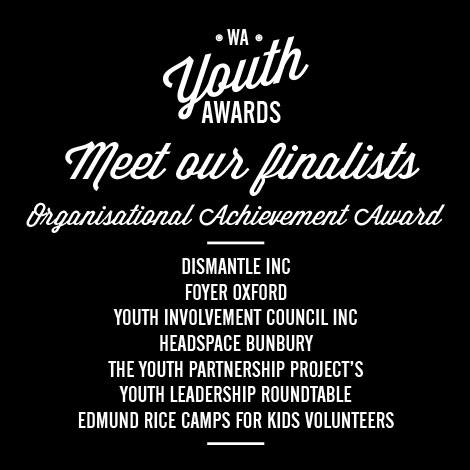 We are very happy to announce that headspace Bunbury are finalists for a WA Youth Award!

After being nominated in the 'Campaign Capital Organisational Achievement' category, headspace Bunbury have progressed to the final stage for the award, along with six other organisations.

The other finalists include Dismantle Inc, Foyer Oxford, Youth Involvement Council Inc, the Youth Partnership Project's Youth Leadership Roundtable, and the Edmund Rice Camps For Kids Volunteers. All these groups should be commended for their very important contributions to young people in WA.

Manager for headspace Bunbury Nicky Smith said they were thrilled to be a finalist in this category, especially alongside the other fantastic organisations who all do an amazing job helping and supporting young people.

To find out who will be announced the winner of this category make sure you get your tickets to attend the Awards gala ceremony here:

About the WA Youth Awards

The WA Youth Awards were established in 1999 to recognise young Western Australians aged 12 to 25 years for their achievements and contributions to the community. The Awards also reward outstanding youth groups and organisations that serve and support the state’s young people

The WA Youth Awards 2015 are proudly presented by the Youth Affairs Council of Western Australia, in partnership with the Department of Local Government and Communities. The Awards are supported by Lotterywest.